NEW DELHI: The Aussie players made merry, raking in the big bucks at the IPL 2020 players’ auction in Kolkata on Thursday. In a fierce competition between eight franchises, fighting it out, to put together the best teams possible, the Aussies emerged as the most dominant lot.

Out of a total of 338 players who went under the hammer, 62 were sold at the auction table in Kolkata. The eight franchises together spent Rs 140.3 crore with Australian cricketers like

On the list of five most expensive players at the auction, three were Australians. Pacer Pat Cummins was the talk of the town as he became the most expensive foreign buy ever in IPL history. Cummins fetched a whopping Rs 15.50 crore bid from two-time champions Kolkata Knight Riders as he broke the record held previously by Ben Stokes — who was bought by Rising Pune Supergiant for Rs 14.5 crore in the 2017 auction. In a fierce 3-way bidding war, KKR eventually outbid Delhi Capitals and Royal Challengers Bangalore to buy the world’s No.1 Test bowler.

Cummins was part of the Kolkata squad in 2014 and 2015 and last played in the tournament for Delhi in 2017. The Mumbai Indians picked him up the following season but he was ruled out with a back injury.

“I thought he was the best player of the auction…as a cricketer he’s grown, his body has become robust. He is now the vice-captain of Australia cricket team team, which is a mark of his development. Wonderful to secure a world-class player,” said KKR coach Brendon McCullum after buying Cummins. 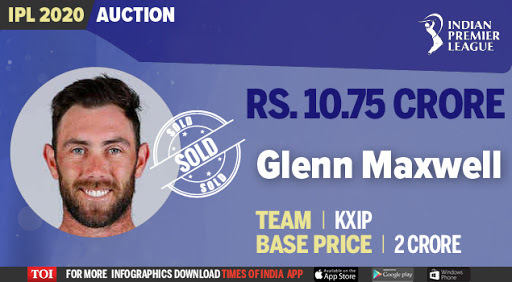 Glenn Maxwell’s international break due to difficulties with mental health did not bother the franchises much as they went all out to buy the flamboyant all-rounder. Maxwell ended up fetching a whopping Rs 10.75 crores — becoming the second most expensive buy at the auction — and will represent Kings XI Punjab in the upcoming 2020 edition. The 31-year-old did not feature in the 2019 edition of the IPL, but will be seen in action next year. Maxwell recently returned from his break and is currently playing for Melbourne Stars in the Big Bash League. 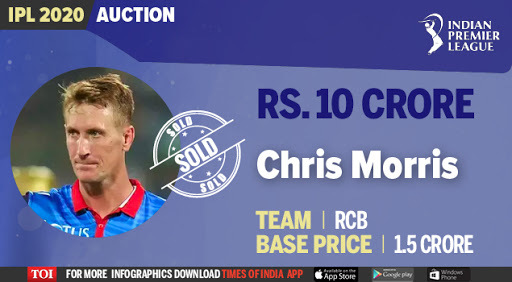 In what was one of the big surprises of the auction, South African all-rounder Chris Morris was snapped up by Royal Challengers Bangalore for a big amount of Rs 10 crore. With a base price of Rs 1.5 crore, Morris cashed in big, as franchises were in pursuit of a powerful and impactful all-rounder. Rajasthan Royals showed the initial interest in buying Morris but then RCB and Kings XI Punjab went into a bidding war as RR was left behind. When the numbers went surprisingly up, Mumbai Indians too threw in their hat in the ring, but RCB eventually bagged Morris for a whopping sum of Rs 10 Crore. 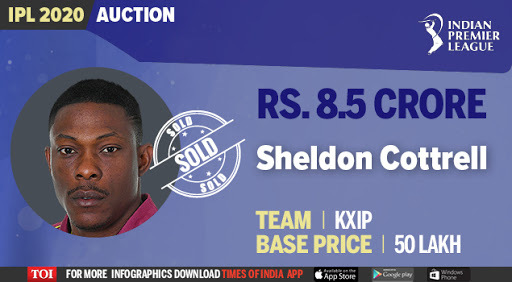 Cricket’s biggest extravaganza will see the ‘Cottrell salute’ in the upcoming edition as the left-arm pacer attracted buyers for the first time in the IPL. A cracking performance in the shortest format for Windies helped him catch the eye of the franchises as they went out on a bidding war at the auction. Eventually Kings XI Punjab won the 3-way battle which also included Delhi Capitals and Rajasthan Royals. The Punjab based franchise had to spend Rs 8.5 crore to buy the services of Cottrell, making him the fourth highest purchase in the auction.

“Very happy to have Cottrell on board,” said KXIP co-owner Ness Wadia. 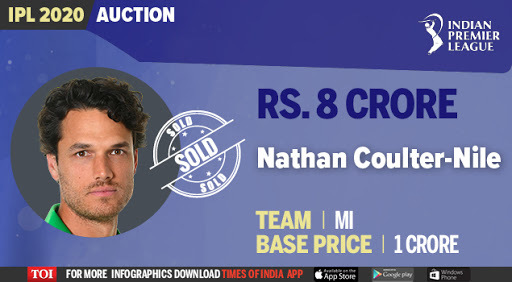 , after he was bought for a sum of Rs 8 crore by the defending champions Mumbai Indians. In a fierce battle with last year’s runners-up Chennai Super Kings, MI had to shell out a substantial sum to grab the Western Australian. After a brilliant international year followed by some good performances in the domestic circuit helped Coulter-Nile grab the headlines at the auction.