In what could bring relief to over 20,000 homebuyers stuck with incomplete homes, the government’s construction arm, the NBCC, has emerged as the clear winner to acquire the embattled realty firm Jaypee Infratech with 97.36 percent vote share, sources told Moneycontrol.

NBCC’s resolution plan has been approved by the Committee of Creditors (CoC) with a 97.36 percent majority, sources said.

This is the third round of bidding to find a buyer for Jaypee Infratech, which went into Corporate Insolvency Resolution Process (CIRP) in August 2017. 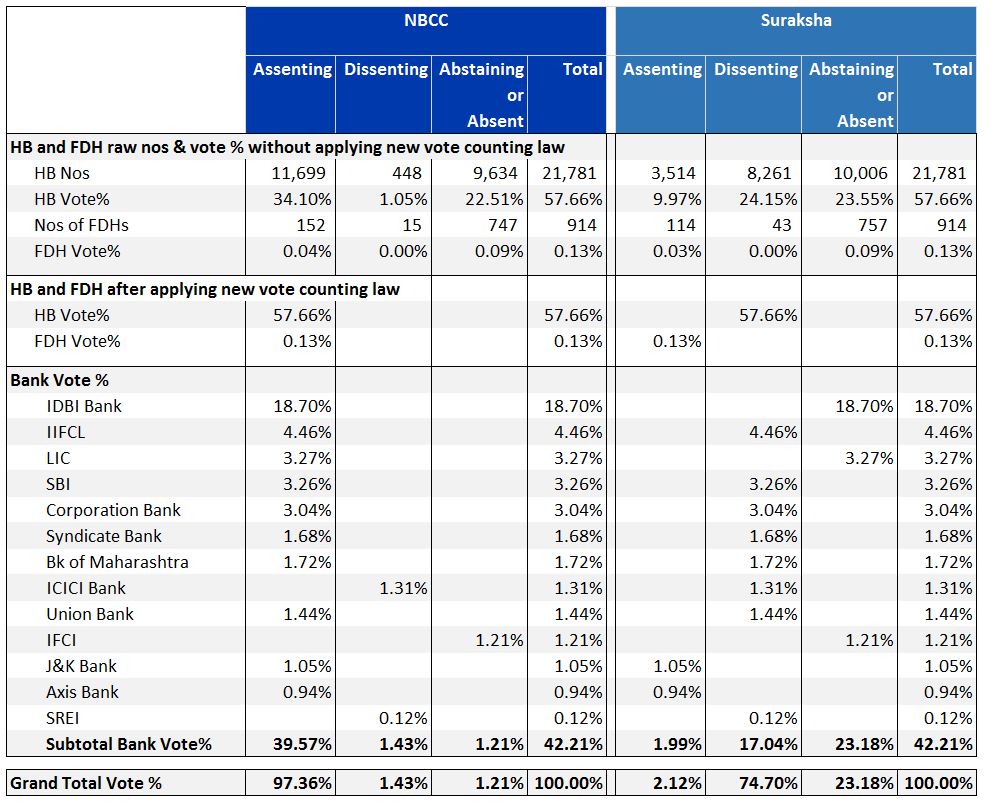 The e-voting process began on December 10 and ended on December 16. Postal ballots were received on December 17. This is the third round of bidding that was initiated on the direction of the Supreme Court. The new vote counting law requires that votes of all homebuyers have to be treated as a single vote which shall be counted either in favor or against, depending on the majority decision of the homebuyers. This new vote counting law is also applicable to fixed deposit holders.

As many as 13 banks and over 23,000 homebuyers have voting rights in the Committee of Creditors (CoC). Buyers have around 58 percent votes. A bid needed at least 66 percent of the votes to receive approval.

Once the voting results are declared, the interim resolution professional, Anuj Jain, would file a report of the voting results with the adjudicating authority, which in this case is National Company Law Tribunal (NCLT) Allahabad, before December 21.

The day would mark the 45th day since the Supreme Court gave its directions. The NCLT would issue the final order within the next 45 days, legal sources said.

NBCC will then be handed over the letter of intent (LoI), which is an agreement that confirms the course of action that will be taken after the takeover of Jaypee Infratech, sources said, adding that NBCC will also have to submit a performance bank guarantee.

In all likelihood, after the NCLT issues its order, NBCC may take another 90 days to be ready with the formalities such as final tower-wise completion schedule, and collecting data required to prepare tenders.

Actual construction of the stuck projects may start not before April, sources told Moneycontrol.

The events so far

Suraksha Realty, in its revised resolution plan, has increased its upfront payment to lenders to Rs 190 crore from Rs 175 crore, while the size of the land-debt swap improved to 2,275 acre from 2,220 acre in its final bid submitted on December 3.

For homebuyers, NBCC has proposed to complete pending units, about 20,000 flats, in three-and-a-half years, while Suraksha promised their completion in three years.

During the meeting earlier this month, some banks had opposed the decision to put both the resolution plans to vote at the same time as they wanted the bid of highest bidder (H1) to be the first. However, lenders could not finalise on H1 and H2 (second highest bidder), and therefore decided to opt for simultaneous voting.

Jaypee Infratech, a subsidiary of crisis-hit Jaiprakash Associates, went into insolvency process in August 2017 after the NCLT admitted an application by an IDBI Bank-led consortium.

In the first round of insolvency proceedings conducted last year, the Rs 7,350-crore bid of Lakshdeep, a part of the Suraksha Group, was rejected by lenders.

The CoC rejected the bids of Suraksha Realty and NBCC in the second round held in May-June. The matter reached to the National Company Law Appellate Tribunal (NCLAT) and then the Supreme Court.

On November 6, the Supreme Court directed completion of Jaypee Infratech’s insolvency process within 90 days, adding that the revised resolution plan would be invited only from NBCC and Suraksha Realty.

LIVE NOW… Video series on How to Double Your Monthly Income… where Rahul Shah, Ex-Swiss Investment Banker and one of India’s leading experts on wealth building, reveals his secret strategies for the first time ever. Register here to watch it for FREE.